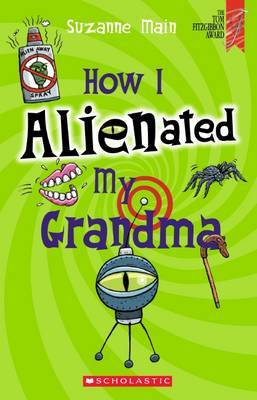 How I Alienated My Grandma

'At precisely 4.23 in the afternoon, my grandma turned into an alien. Correction. At precisely 4.23 in the afternoon, I turned my grandma into an alien. I was not having a good day.' And so begins Suzanne Main's highly entertaining, award-winning story about the hapless Michael and his mate Elvis as they join forces with Mad Bill to save the Earth from impending alien invasion - facilitated by Michael's grandma!

Suzanne Main spent the first twenty years of her career working as an accountant in her hometown of Wellington and overseas. In 2011, she took up creative writing with the New Zealand Writers College, followed by a weekend novel-writing workshop where the idea for her first book was hatched. How I Alienated My Grandma was the winner of the 2014 Storylines Tom Fitzgibbon Award. Fraser Williamson grew up on the North Shore of Auckland, and describes his childhood as dominated by the beach, surfing, and the sea. He studied graphic design at AUT before commencing a career illustrating books and painting. He now spends his time between New Zealand, Spain and Tonga, making a living from his creative work with wife Loisi.